For a state with a coast line, Connecticut birders get very few good looks at Brant, Branta bernicla hrota. While they can number in the thousands along shores of Long Island Sound and in the major river estuaries, the only looks we get are of birds bobbing in the waves or feeding against the various rock jetties that punctuate the shore, or of large skeins migrating high overhead. 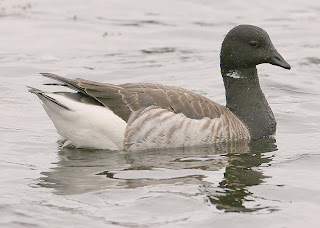 Typical adult Brant, B. b. hrota 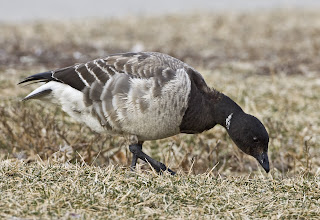 Still, I have been looking for a Black Brant for years, hoping against all odds to see one of these western birds mixed in the flocks. It hasn’t been easy.

On 10 April 2009, Nick Bonomo, doing the work of an active and skilled field birder, located an adult Black Brant off the coast of Short Beach in Stratford, Fairfield County. This bird was with a thousand or so Brant that had been frequenting the jetties and mud flats at the mouth of the Housatonic River where it meets the Sound. The weather was deteriorating when he found it late in the day and the light was fading fast. The next day was even worse with a mixture of sleet and cold rain making observation a chore at best. I relocated the bird on 11 April 2009 in the same general location Nick found it the day before. It was with a few hundred Brant about 300 yards offshore. I managed a few poor digiscoped images before the bird flew around into the mouth of the river and eventually re-appeared on the sand bars off of Milford Point, New Haven County. 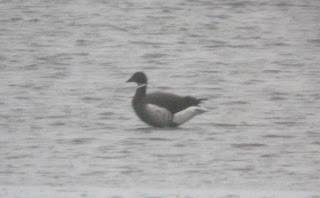 This bird was a typical Black Brant, showing the bold white collar that nearly encircled the neck, unlike the small broken collar of eastern Brant. On the water, it showed a bright white area in the rear flanks that contrasted with a very dark back and chest.

Out of the water, the dark, nearly blackish collar joined the dark breast creating an all-dark look to the front of the bird. This darkness continued down under the bird between its legs and to the lower belly, stopping at the white under tail area. The Black Brant seemed more robust that the other brant present. 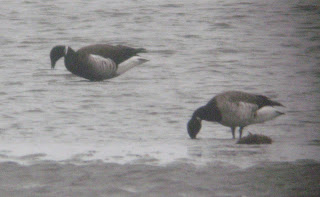 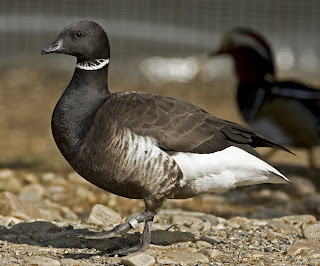 Black Brant in Ripley Waterfowl Conservancy collection, Litchfield, Connecticut
Looking back through my records I found a very poor image of a brant I digiscoped off of Shippan Point, Stamford, Fairfield County, on 17 March 2003. This bird was tentatively identified as Gray-bellied Brant, Branta bernicla ?, a form whose range includes the high arctic and Melville Island that winters in Puget Sound. This form, possibly a fourth subspecies of Brant ( Brant hrota, Black-Brant nigricans, Dark-bellied Brant bernicla) or part of a hybrid population between Black Brant and Brant, is not fully understood. There are a few recent records from Long Island that may pertain to Gray-bellied Brant.
(see http://www.oceanwanderers.com/ for a discussion of Brant subspecies identification and of Gray-bellied Brant)

While similar to Black Brant, this bird showed more contrast between the breast and the black neck stocking and showed a smaller white patch at the sides of the neck and not the nearly complete bold collar of Black Brant. The white at the rear flanks was not as crisp as appears on Black Brant. The bird was significanltly darker below than should be shown by eastern brant, hrota. 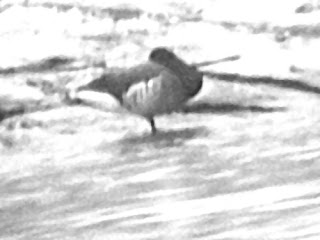