Birthday birding. It is something that I have been doing for years. I have the good fortune to be born late in the year. The last day of November is a time when western strays have frequently been recorded in Connecticut. In 2009, my birthday fell on a Monday, a day when I had to be at school, so I went out on the day before to see what I could find. On 29 November, I was birding at Hammonasset Beach State Park in Madison, New Haven County. The day was slow. I was photographing some gulls in the main parking area when Nick Bonomo stopped by my car to say that there were a few late orioles in the park’s campground. He said that one of them, a female, looked interesting to him. We teamed up to go investigate the birds.

The first oriole we located was an adult male perched out on a Red Cedar in the bright morning sun. We simultaneously noted that the bird seemed odd. It had what we thought looked like too much white in the wing. We studied the bird for a while and I secured several good photos of the bird. We were not sure but thought that this bird, which had been reported as an adult male Baltimore Oriole for several days, looked like it might have some Bullock’s Oriole in its ancestry. We finished birding the area and found an amazing total of six orioles, five looking like winter females or immatures and the one adult male.

Upon loading the images on to my computer, other characters became evident on the adult male that pointed again to a mixed heritage. Aside from the extensive amount of white in the greater wing coverts and edges of the tertials , the bird showed orange feathering in the malar area. The tail, which on Baltimore shows black bases to the rectrices, showed orange bases to the outer rectrices. The central tail feathers, normally totally black on Baltimore Oriole, were about half to two-thirds black with the distal third being orange with a dark smudge near the tip. This tail pattern, greater covert pattern, and orange in the malar are characters that fit Bullock’s Oriole.

A check of the literature revealed an old article on hybrid oriole plumages by George Miksch Sutton. It was published in The Auk, Volume 55 No. 1 in January 1938. The article, Oddly Plumaged Orioles in Western Oklahoma, describes a population of orioles that showed characters intermediate between Baltimore and Bullock’s Orioles. This geographic area is a part of the contact zone for these two species breeding territory. In the article, Sutton describes plumages showing varying degrees of evident interbreeding between the species. He includes a plate of illustrations to accompany the descriptions. The Madison bird showed characters of birds on this plate, and showed even more Bullock’s like tail characters than illustrated in this plate.

I sent my photos to two contemporary experts on the genus Icterus, Alvaro Jaramillo and James Rising. Both agreed that the Connecticut bird showed traits of an intergrade oriole, a bird that had both Baltimore and Bullock’s genetics. It is uncertain what generation intergrade this bird was but likely not F1.

Plate 1 shows a good representative image of this intergrade oriole.

A. The wing coverts show extensive white tips and edges, nearly forming a solid white bar across the greater coverts. The tertials are also broadly edged in white.
B. Shows the orange base to the outer tail feathers and more limited black to the central tail feathers.
C. Shows scattered orange feathering in the malar region. 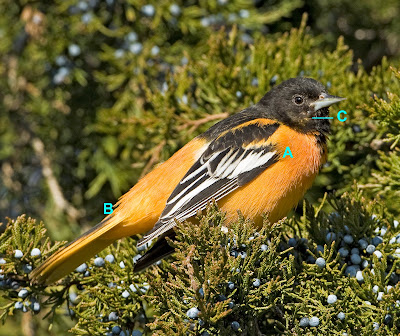 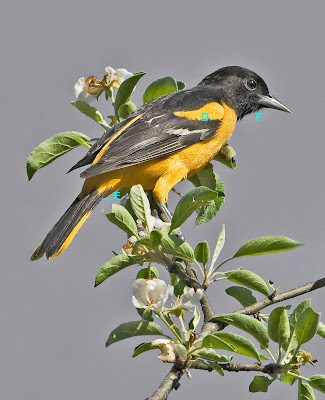 D. Shows the more limited white edges to the greater coverts and tertials. Actually, this individual is a little darker here than may be typical but it is in the range of a normal Baltimore.
E. Shows the black bases to the tail and the extensive black of the central tail feathers.
F. Shows the solid black malar region.


A brief search in the literature did not turn up many recent images of this hybrid combination so we were very fortunate to secure a wide range of photos showing the characteristics fairly well. Thanks to Nick, Birthday Birding once again was full of very neat presents!