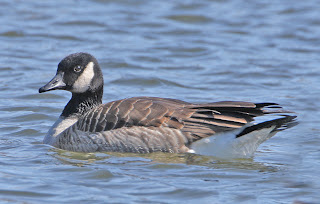 It seems good things happen when I chase Greater White-fronted Geese. Remember the Taverner’s Cackling Goose? Well, on 23 March 2008, I was trying to get pictures of a beautiful Greenland-race Greater White-fronted Goose, Anser albifrons flavirostris, which was offering very confiding views on Mirror Lake, the small pond on the University of Connecticut campus in Storrs, Tolland County. While maneuvering for closer photos, I noticed a very small Canada-type Goose resting on the water with the other geese. Thinking it was a Richardson’s Cackling Goose, Branta hutchinsii hutchinsii, I snapped one photo and continued my quest for flavirostris pictures. Only later, while I was processing my images, did I notice something wrong with this identification.

Richardson’s Goose, our expected form of Cackling Goose, shows a short, stubby bill that usually appears convex along the culmen. It sometimes looks rather bumpy and warty (my description, not really in the literature). Hutchinsii also shows a square and rather blocky head shape. This bird showed a bill that was smooth and shaped like a smaller version of a Canada Goose bill. It was long and slender, not at all what I am accustomed to seeing on Cackling Goose. The bird was small, though, as small as a Cackling Goose. In plumage, it seemed identical to the other Canada Geese on the lake.

I started wondering what a Lesser Canada Goose, B. c. parvipes, would look like. A check of on-line images seemed to indicate that this could be what I photographed. I once again sent images to my trio of western goose experts, Steve Mlodinow, Bruce Deuel, and Larry Semo. Mlodinow deferred to the other two as they have more experience with this form.

Again, Bruce and Larry confirmed my identification as Lesser Canada Goose, stating that the head and bill shape and size of the bird were much better for this form than for any Cackling Goose.

Larry Semo states, “Your bird looks like a dead ringer for parvipes to me. Though neck size and head shape could suggest Richardson's, the longer, concave bill and the length of the body relative to the head/neck size/shape would indicate parvipes.”.

Quoting from the Birds of North America Online account for Canada Goose,
“B. c. parvipes (Cassin, 1852); type locality Veracruz, Mexico. Lesser Canada Goose. Breeds throughout boreal regions in widely scattered areas along stream banks, river islands, and beaver (Castor canadensis) ponds, from the central interior of Alaska east through n. Yukon, n. Northwest Territories (Mackenzie River delta), s. Victoria I., Queen Maud Gulf, and e. Nunavut, south to n. British Columbia, n. Alberta, n. Saskatchewan, extreme n. Manitoba to nw. Hudson Bay (Am. Ornithol. Union 1957, MacInnes 1963, Salter et al. 1980, Semenchuk 1992, Smith 1996). Intergrades with B. c. taverneri in western interior of Alaska, with B. c. hutchinsii throughout the tundra portion of its range, and to the south with B. c. maxima and B. c. moffitti (Palmer 1976, Johnsgard 1978); considered morphologically inseparable from B. c. taverneri and treated as a single subspecies by Palmer (1976). Analysis of leg-band recovery data (Migratory Bird Banding Laboratory) indicates that small Canada Geese originating from interior Alaska (presumed B. c. parvipes) and the North Slope of Alaska (B. c. taverneri / B. c. parvipes complex?) winter primarily in e. Washington and Oregon, while small Canada Geese originating in far w. Alaska (presumed B. c. taverneri) winter primarily in w. Washington and Oregon, and n. California (CRE). Others consider B. c. parvipes to winter from w. Washington (Smith et al. 1997) and Oregon (Gilligan et al. 1994) south to extreme n. California (Tule and Lower Klamath Lakes; Small 1994) n. Mexico (Howell and Webb 1995), se. Colorado, ne. New Mexico, nw. Texas, w. Oklahoma (Am. Ornithol. Union 1957, Grieb 1970, Jarvis and Cornely 1988, Small 1994, Jarvis and Bromley 1998). A medium-sized goose, similar in overall shape and color to B. c. moffitti, with pale to dusky breast.”.
As far as I know, Lesser Canada Goose is rarely, if ever, documented in Connecticut and the only other record I am aware of is a sighting by Frank Gallo of a small flock including a Richardson’s Cackling Goose. I have not seen his photos but they should be examined to try and confirm this record. It is likely that hunters take this form during the goose hunting season and perhaps a search of the DEP Game Division database will provide a better idea of its occurrence in the state.
Again, thanks go to the West Coast Anser-men, Steve Mlodinow, Larry Semo, and Bruce Deuel for their information and support and to the vast number of people who post images on the web and thereby allow me to spend even more hours chasing birds at the Geek level. 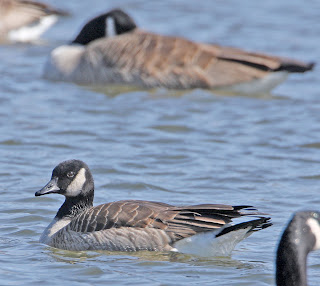 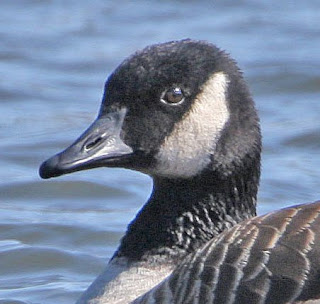